In October 2020 the EU National Institutes for Culture, Brussels, hosted the tenth edition of the TRANSPOESIE poetry festival, an annual event that celebrates the diversity of European languages including a showcase of poems from across Europe displayed on public transport in the Belgian capital. This year local poet, Stephen Sexton, was selected by the Arts Council NI to represent our region and bring the richness of Northern Ireland literature to Brussels commuters and key EU officials. 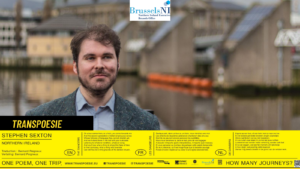 The TRANSPOESIE festival is organised with involvement from over 20 countries and regions who have representation offices based in Brussels. Stephen Sexton’s poem ‘The Dancers’ was chosen for this year’s festival, translated into both French and Dutch and was also exhibited in the Brussels Park Royal. Through his poetry, Stephen illustrates how video games have helped him come to terms with grief, using well known characters such as Super Mario as part of his work. He has won multiple prizes around the world including the Forward Prize for Best First Collection, the Eric Gregory Award from the Society of Authors and the 2016 UK National Poetry Competition. 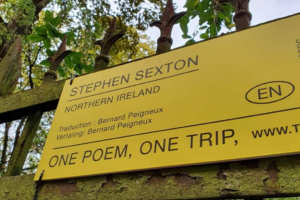 The Office of the Northern Ireland Executive was also pleased to support Stephen’s participation in a panel discussion on 30 September 2020 hosted by the Hungarian Institute of Culture in Brussels which reached over 1000 people worldwide. This event was organised in a unique and innovative hybrid way, allowing the public to join in person as well as virtually and to participate in moderated discussions with the different authors participating in the festival. Stephen joined poets Miren Agur Meabe from the Basque Country, Jaromír Typlt from the Czech Republic, Adrian Perera from Finland, Lia Sturua from Georgia and Josep Pedrals from Spain in a fascinating discussion moderated by Belgian musician and songwriter Kriticos Mwansa. They explored their reflections on the process of poetry writing, advice they would give to new writers, their inspirations and how the current pandemic has impacted their work. 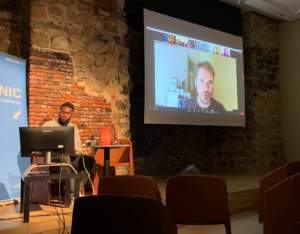 Lynsey Moore, Director of the Office of the Northern Ireland Executive in Brussels, speaking after the event said ‘Stephen Sexton was an excellent ambassador for our region’s Arts and Culture and we are delighted to continue our partnership with TRANSPOESIE and Arts Council NI this year.  This type of cultural event helps keep our artists   connected to others across Europe opening opportunities for discussions, mutual understanding and dialogue as well as promoting our creativity and talent to new audiences.’

A recording of the live Zoom event can be watched here TRANSPOESIE Facebook.

To keep up to date with our events in Brussels, make sure to follow @BrusselsNI on Twitter and to keep up with Northern Ireland Poet Stephen Sexton follow him on @ssexton02.